Dave was born and raised in the coastal town of Umhlanga Rocks just outside of Durban.  He is a former professional surfer and South African champion who has spent the last 40 years in pursuit of the perfect wave.  Dave, a respected member of the local surfing community, has years of experience and a vast knowledge of the KwaZulu - Natal and Mozambique coastlines.  If there ever was a surfer from this region that could guide you to the best surf spots daily then Dave is your man.  Besides being a former professional surfer Dave is also a qualified professional surf instructor and coach.

Monte arrived in Southern Africa during a USA medical mission to Lesotho in 2000, and kind of just stayed.  He comes from Oregon where he worked as a Fire Fighter/Medic with Nestucca Fire Rescue, and Pacific West Ambulance.  He was also a Swift Water Rescue Technician, and he was captain of the NRFPD Water Rescue Team.  Over the years Monte has also been involved in film and video production, and has traveled around the world surfing and filming. 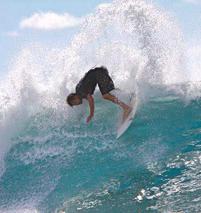 Justin, or Bird as he's affectionately known by his friends and family, originally hails from Laguna Beach, California but now resides in Durban, South Africa.  Justin attended Pepperdine University in California where he obtained his degree of Bachelor of Science in International Business.  Justin is a surfer with 30 years experience having traveled the world in search of surf and adventure.  Justin's travels have seen him living and working in Indonesia, surfing in Mexico, Costa Rica, Australia, the South Pacific, Israel, France, Spain, Hawaii and many other destinations around the world.  Bird has also traveled extensively through South Africa and Mozambique - his home away from home.  Hailing from foreign descent, Justin is able to identify and meet the needs of the foreign traveler. 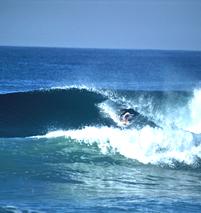 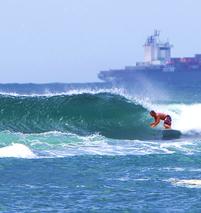 Experience a professionally run surfing and game watching eco tour along our amazing sub-tropical coastline, north and south of Durban, the kingdom of the Zulu, offering a variety of waves to suit all abilities. Explore hidden and uncrowded points, reefs and beach breaks along this world class surfing region. Sample diverse cultures and cuisines whilst enjoying the vibrant and exciting nightlife of the city. Relax in solitude in one of the quiet, point break beach's of Mozambique. With African Surfaris you'll get to experience all this and much more. So join African Surfaris as we take you on a surf tour like no other, where your dreams become reality and your memories last forever...

The concept behind African Surfaris is an idea which has been floating around for some time but it was the meeting of Justin Starow (Bird) and Dave Renaud which saw the company officially form in early 2002. The company is based in Durban, South Africa which is the perfect base camp due to it's centralized location in regards to accessibility to the various surf spots and Game Reserves. Apart from a tour of the world class surf spots along the coast of KwaZulu Natal and viewing game at one of the natural heritage game reserves African Surfaris specializes in Mozambique - the land of sand bottom points, crystal clear warm water and little to no crowds.